ELLIE AND THE SECRET GARDEN
by Sophie, 6, VIC

One windy, cold night, Ellie was in her bed. She could not get to sleep. Just when she was getting to sleep, a big gust of wind came in through the window. She was so curious. She went to the door. She pushed the door open. 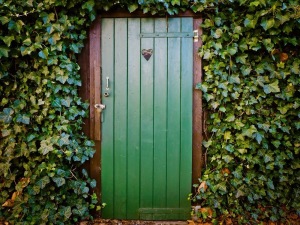 Then it stopped and put her down. Then it did the same again, but this time it didn’t carry Ellie away. Instead, it blew the ivy on the wall, and under the ivy, Ellie saw a door.

“Maybe it’s the secret garden.” Her mum had told her stories about it.

She tried to turn the handle. It was very stiff, but she could just turn it. The next second, she was in the secret garden.

When she got back into bed, it was morning.

“Okay,” said Ellie, “but before that, I’m going to put on my school clothes.”

Once Ellie got them on, she went down to the garden. She opened the door, then she shut the door behind her. Then she bobbed down and started clearing dead leaves and grass.

When she finished, she went inside and had her breakfast, then she went to school on the school bus. She told her friends about that garden, but they didn’t believe her. But her bestest friend knew that Ellie was telling the truth.

When it was home time, Sophie, which is Ellie’s best friend, asked her mum and Ellie’s mum if she could have a play at Ellie’s house. They said yes.

Sophie ran up to Ellie, but when Sophie saw Ellie, she was talking to some people and making new friends and asking them to be her best friends. It made Sophie feel sad.

When Ellie’s new friends had gone, Sophie went up to Ellie. She told Ellie how she felt. Then Ellie said to herself, ‘she is my best friend,’ then she stopped daydreaming, and said sorry to Sophie. Then Sophie told Ellie about the play. Ellie was so excited.

Sophie went in Ellie’s car. It was so fun. When they got to Ellie’s house, Ellie and Sophie went down to the garden.

She said, “Come with me, Sophie.” They tiptoed to the door. They opened the door, then they pushed the door shut. Sophie was amazed. There were roses everywhere. Sophie’s mouth dropped open when she saw them.

This is Sophie’s first story for Alphabet Soup. To send us YOUR story, poem, artwork or book review, check out our submission guidelines. Happy reading!

2 thoughts on “Young writers in action: Ellie and the Secret Garden”