It was such a miserable day. If you add up all of the miserableness in the world and then times it by the weight of the world, the day was still more miserable. It was rainy, but at the same time, it was hot and humid so it was worse being inside than out. Toby was trapped inside The Great Tree of Woof. He had all of his other doggy friends, of course, but Toby had cabin fever and he wanted to go outside, desperately.

The problem was though, The Great Tree of Woof was being rather inconvenient. It had this terrible habit of making all of the doors too small when it was raining. Yes, to you and me this seems like a good idea because if all of those dogs went outside into the rain then they would come back muddy and disgusting. But for Toby, it was unbearable.

Toby was starting to hallucinate. He was certain that he saw Felix, the smallest dog at The Great Tree of Woof, waltzing upside down on the ceiling. This was getting ridiculous. Toby HAD to get out. 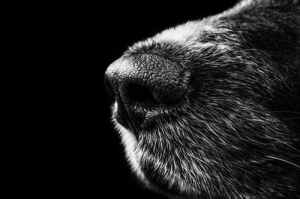 Toby had to just make do for now and only stick out his snout. It was better than nothing.

Rain splattered down on Toby’s nose. It was nice and refreshing. The memories of when he was a puppy came back to him. How he could sneak out because he was so small. Toby wished that he was still that small. The rain drops became bigger and Toby started to feel drowsy.

As he lay down thunder rumbled up ahead. He wasn’t going to be able to sleep for long. When the thunder started he, being the oldest and wisest dog there, had to calm all of the puppies down.

Toby wriggled to get comfy and drifted off to sleep.

We will be sharing writing from students at Bowral Public School over the next few days. If you’d like to send us YOUR book review, story, poem or artwork, check out our submission guidelines.