The publisher provided a review copy of this book.

Toffle Towers: Order in the Court is the third book in the Toffle Towers series. It is about a young manager for a hotel and his name is Chegwin. It is set in a place called Alandale where there are two hotels – Toffle Towers and Braxton Hotel. Chegwin Toffle is the young manager of the hotel Toffle Towers. Chegwin has to figure out what to do when some of the guests’ belongings … disappear! To catch the thief Chegwin makes a talent show and lets everyone know that there is $2,000 to win at the back of the room! Chegwin and his friends go to the back of the room, tie a string to Chegwin’s finger and then tie the string to the prize money (Chegwin will feel a tug on the string when the thief tries to steal the money). But what will Chegwin find out in the end … ?

I like all the funny pictures and strange things in this book. For example there are these funny conversations where there are lots of spelling mistakes (put there on purpose!).

Rory is a regular reviewer for Alphabet Soup. Read his previous review of The Australia Survival Guide by George Ivanoff. 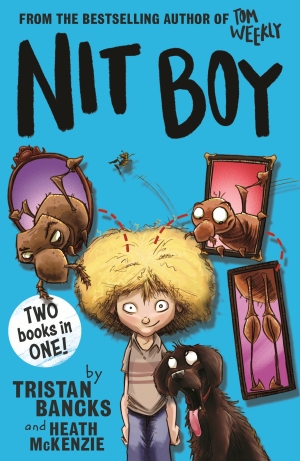 The publisher provided a review copy of this book.

Nit Boy was about a boy called Lewis who had lots of nits. He had a teacher called Mrs Horrock. He was never allowed to go to school because of his nits, because the kids in his class caught them from him. Lewis loved his nits, though. They were his pets. Mrs Horrock made up the nit buster to make the nits jump away.

Ned was one of Lewis’s nits. Ned was a jumping nit. Sheena also lived on Lewis’s head and was his friend.

My favourite part of the book was when Lewis played a prank on Mrs Horrock and took his Dad’s insects to school. The bit I didn’t like about the book was how it changed between Lewis speaking and Ned speaking. I thought it was tricky to read when this happened. I give the story 4 out of 5 and would recommend it though.

Check out our interview with the (itchy) author of Nit Boy

This is Henry’s first book review for Alphabet Soup. If YOU would like to send us a book review, check out our submission guidelines. Happy reading!

Jane received a review copy of this book from the publisher.

‘What’s that?’ (Mumma-Sue) pointed to a small tree, which had sprouted in the leaves composting under Tom’s booster seat.

Mumma-Jacq bent down to pick it up. ‘It’s a small tree,’ she said.

‘I can see that.’ Mumma-Sue rolled her eyes.

‘Possibly a fig or a plum.’ Mumma-Jacq examined a tiny green leaf.

‘Well, that’s terrific. But what’s it doing sprouting in the back seat of the car?’ Mumma-Sue tried not to yell. She was not successful.

I think lots of people will like this book, including adults.

This is Jane’s first book review for Alphabet Soup. If YOU would like to send us a book review, check out our submission guidelines. Happy reading! 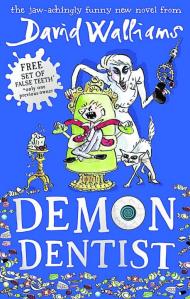 Cadence reviewed her own copy of this book.

David Walliams’ fascinating chapter book Demon Dentist combines horrific details, very cheerful endings with parts that would make you desperate to cry in an instant! Demon Dentist is a very emotional book. It includes petrifying moments, depressing chapters and pages that would blow your socks off by the way the mood changed from paranoid to like the way you just ate your favourite food! The interesting characters will dazzle you.

Alfie has already had an appalling time since he has lost his mother and now his father has been put in a wheelchair due to his shallow breathing. Now his extremely shy principal allows some new dentist — Miss Root — into their school. Ever since Miss Root arrived, the shortest girl in the school ‘Gabz’ has been stating that a witch had been flying around town stealing teeth and returning them with revolting items like ‘bats wings, fresh eyeballs’ and so on.

The first thing you noticed about Miss Root were her sparkling white teeth, and then to her black eyes that were as black as the darkest hour of midnight. With Alfie’s awesome eyes he even spotted a splat of red blood on Miss Root’s blinding white shoes. Although Miss Root sounds as nice as ever, why would she give away ‘MUMMY’S’ toothpaste that burned through stone and give free lollies that looked as if they were loaded with tons and tons of sugar.

This novel is really well written. This narrative gives you a bit of shock, happiness, and is yet very intriguing. David Walliams’ Demon Dentist should make you feel like you’re in the story. I would highly recommend this to people of all ages and even people who don’t like reading, because this fantastic book would definitely hook you in, make you want to just read and find out what’s going to happen and even want to read this whole novel over and over again.

This is Cadence’s first book review for Alphabet Soup.  If YOU would like to send us a book review, check out our submission guidelines. 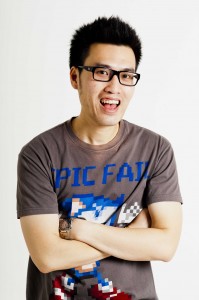 Today we welcome Oliver Phommavanh as a guest on Alphabet Soup — he’s on a blog tour to celebrate the launch of his latest book The Other Christy.

Oliver’s books make us laugh, do you recognise some of these?

And now — over to Oliver Phommavanh!

Hey creative writers out there!

Kids always ask me, how do you make something funny? Normally I would reply by saying anything can be funny. But what if I replied by throwing a cream pie in their faces or if I screamed like a cockatoo who’s just woken up from a nightmare (which is like all the time, have you seen their hair?)? Then that might be funny. Okay, scary for the kids, but I’m laughing.

You see, a good place to start is to think about what’s the opposite of normal, or something unexpected. A lot of funny stuff comes when it’s a surprise and it’s least expected. Do you expect a T-Rex to moo like a cow? Of course not (I hope). But that’s what’s going to surprise the reader and hopefully make them laugh.

In my latest book, The Other Christy, Christy is a shy girl who loves to bake. And she’s being pushed around by another girl named Christie, who is a real meanie. Whenever it’s Christie’s birthday, she brings in a cake to the class and Christy is always left out. So when Christy decides to bake a delicious triple-choc cheesecake for her own birthday to share with her class, what do you think she’ll do? Maybe Christy won’t let Christie have a slice. Maybe Christy will give her a poisonous cake, or even worse, give her a bowl of fruit salad instead.

But Christy does something unexpected. The total opposite of normal. She decides to give Christie a slice, which surprises Christie and it’s the start of a strange friendship.

Anybody can come up with some opposites. Think about jobs, like a butcher who’s vegetarian. A doctor who’s afraid of blood. Have a go with thinking about what opposites these jobs might have:

We can find opposites with animals or things too. Think about a lion, what are they normally known for? Being brave? Being vicious? What is something unexpected that a lion could have?

So next time you are stuck with making up a funny character, start with someone or something ‘normal’ and flip it around with something unexpected, the opposite of what they could be. Then maybe if you see me, you might throw a cream pie at my face. I’ll be ready though, with my spoon in my pocket. Happy writing!

This isn’t the first time Oliver has visited us, make sure you check out his earlier posts: ‘Three Quick Questions’, and ‘Meet the Author’.

You can find out more about Oliver Phommavanh and his books on his website. This post was one stop on a blog tour to celebrate the launch of THE OTHER CHRISTY — published in June 2016.