Today Katrina Germein visits Soup Blog to share about ‘lights out’ (or rather, ON) at her house. Katrina is the author of Big Rain Coming, and Littledog, and she has a new book coming out in August – My Dad Thinks He’s Funny. 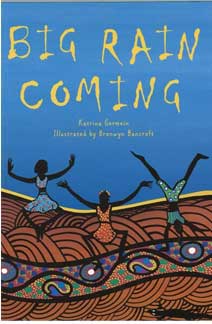 My son thinks he can trick me. He thinks he has me fooled. But I’m smarter than he thinks and I know what he’s up to.

He tells me he wants to sleep with the light on, not just the lamp but the big bedroom light.

I don’t believe him; no one sleeps better with the big light on. Still, I leave the light. I know it’s all part of his sneaky plan.

“Shut the door,” says my son when I kiss him goodnight.

“But you get frightened,” I say.

“Not anymore,” answers my son. “Not now I have the big light on.”

I close the door and leave him alone, alone in his room with the big light on. But he’s not alone really; he’s invited others. They’re all in it together. I wonder who’s conspiring with my son tonight. Zac Power? The BFG? Specky Magee? Bonnie and Sam? Captain Underpants? My son has his favourites. (If it was me I’d choose Pippi Longstocking. But this is my son’s sneaky plan and not mine.) Anyway, I’ll find out who the accomplice is later. I have my ways.

An hour later I open the door. My son is asleep, The Famous Five still in his hand. So that’s who’s been plotting with my son tonight. He’s not the first to fall for their charms.

I kiss my son on top of his head. “Good plan,” I whisper and I turn out the light.

You can find out more about Katrina Germein and her books at her website. 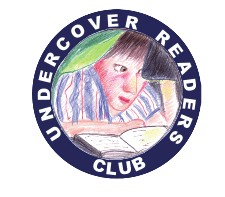 Alphabet Soup magazine is celebrating the launch of Undercover Readers (our new reviewers club for kids)!  If you’d like to join the Undercover Readers Club, you’ll find an information pack you can download from the Alphabet Soup website. As part of the celebrations, we have a different children’s author or illustrator visiting Soup Blog each day until 29 June 2010 to talk about what they used to read after ‘lights out’ when they were growing up. So be sure to check back tomorrow!

6 thoughts on ““Lights Out!” (Katrina Germein)”