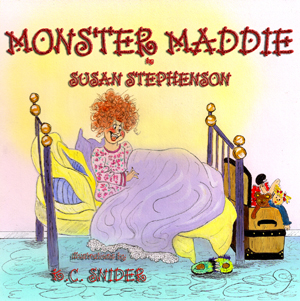 This picture book’s main character—Maddie—hates feeling invisible and ignored on her first day of school. After that terrible first day she decides she’ll make the other kids notice her. And she becomes MONSTER MADDIE, with ‘fangs and claws and wild, wild hair.’ Her mean tricks and bullying behaviour don’t win her any new friends, of course. Even she knows she’s become a monster and she doesn’t like it.

Sometimes it’s hard to know how to make new friends (especially if you’re a bit shy). Monster Maddie shows the approach that some kids might take when they feel lonely and frustrated about joining in.  And Maddie is mean. ‘She put ants in their pants, dirt in their shirts, and ooze in their shoes.‘

When you’re reading the book, you can tell that she’s not going be asked to join in when she’s so mean. I’ve seen kids behaving like Maddie on the playground—back when I was growing up, but also when I’ve been around playgrounds as an adult. Luckily, by the end of the book Maddie comes up with a way to approach the other kids and join in with them. But it’s not much fun for the other kids OR for Maddie until she does!

This picture book includes 7 pages of activities, including a script of Monster Maddie as a play. This is a great idea for a book about bullying—sometimes acting out a story can help you to see things from a character’s point of view. The activities also include ideas for writing, thinking and creating. There are also some questions to get you thinking about bullying behaviour and what you might do if you feel like Maddie (or if you are one of the other kids in the story).

Susan Stephenson writes The Book Chook’s column (with writing tips for kids) in every issue of Alphabet Soup magazine.