A review copy of this book was sent to us by the publisher. 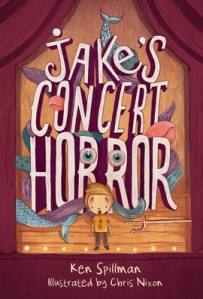 When Mrs Paul announces that the class will be putting on a musical play, Jake imagines himself in all sorts of cool roles—a pirate, a monkey, a robot with a silver-painted box over his head.

But when he hears what the play will be, he’s not impressed.

Yuk, Jake thought. Why couldn’t she choose something about pirates?

But it’s even worse when he finds out what his part is in the play. As the date of the performance gets closer he gets more and more worried.

This is another book in the Jake series—and, as usual, you’ll find Chris Nixon’s fun illustrations on every page. These books are great for kids who are just starting to read chapter books. If you’re already a fan, you’ll love this next book in the series (but you don’t have to read the other books in the series before reading this one. It’s great on its own.)

Everyone worries about something. Jake’s Concert Horror is a book about overcoming your fears.

Look here for a review of an earlier Jake book, Jake’s Great Game.