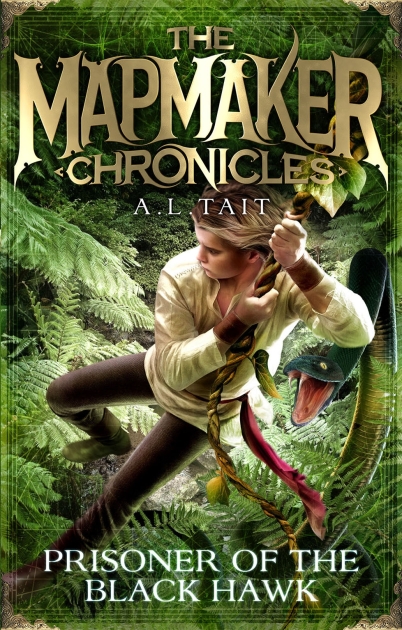 A.L Tait is the author of The Mapmaker Chronicles — an exciting new series, full of danger and adventure. The first book — Race to the End of the World — is already out in bookshops. The second book — Prisoner of the Black Hawk — will be published in April 2015. Today we’re talking to A.L. Tait about writing, and what inspired The Mapmaker Chronicles.

Can you tell us a bit about where you live?
I live on the south coast of NSW, with my family, four goldfish and a very cheeky puppy.

Do you prefer to write with a pen and paper, or onto the computer?
I prefer to write on a computer these days because I type very fast — much faster than I can write with pen and paper — and that means I can keep up with my thoughts. I have to also confess that my handwriting is very bad and I can barely read it myself — so typing is probably the safest option.

What do you like to do when you are not writing?
I like to read! I also like to spend time with my two boys, who are 8 and 11, walking, riding our bikes, going to the beach, and watching movies (we love adventure stories!).

What sort of books did you like to read when you were growing up?
I loved mystery stories, like the Trixie Belden series, The Famous Five, and Encyclopedia Brown. When I got a bit older I read The Lord of The Rings over and over. But the books I most remember are those that made me feel deeply — Storm Boy by Colin Thiele, and Callie’s Castle by Ruth Park are two that stand out.

Did you know you would be writing a series when you started writing Race to the End of the World?
I always thought it had to be a series — or one very long book! A race to map the world isn’t something you can cover in one novel.

What led you to write the series — are you good at making maps yourself?
I’m actually not very good at making maps — but I do love them when they’re made by other people. I particularly love the old maps, made when people weren’t really sure where things were. These are the ones that feature mermaids, and sea monsters and angels in the wind. They’re so beautiful and show us so much about what was known — and what wasn’t.

As for where the ideas for the series came from… my two boys are both fans of the ‘head-hurting’ question. We have long-and-involved conversations about where space ends, how high the stars are, whether there are any places in the world that remain unexplored, which dwarf from The Hobbit I would invite to a dinner party … you get the idea.

Several of those conversations, close together, led to The Mapmaker Chronicles.

“Nobody knows,” I answered.

Then the next night: “How did they map the world?”

“Well, they had to go out there and find out,” I answered, distractedly.

“They must have been brave,” he answered.

“They were,” I said. “They would have felt exactly as we feel looking out into space, not knowing how far it goes or what’s out there.”

And just like that, in my mind I saw a race to map the world, and a boy who really didn’t want to go.

Do you have any advice for young writers?
My first tip is to read a lot. And not just the things you usually read, but all the books you can get your hands on. The more you read, the more you learn about writing.

My second tip is to write a lot. It takes a long time to learn how to write a book — the sooner you get started, the better!

Are you working on any new projects at the moment?
At the moment, I’m busy finishing the editing process for book three in The Mapmaker Chronicles series. After that, I’m not sure. I have lots and lots of ideas, and I need to work out which one of them to write first. I’ll keep you posted!

Check out The Mapmaker Chronicles website to read Chapter 1 of Book 1 (for free!), find out about old maps, cartography, and more.