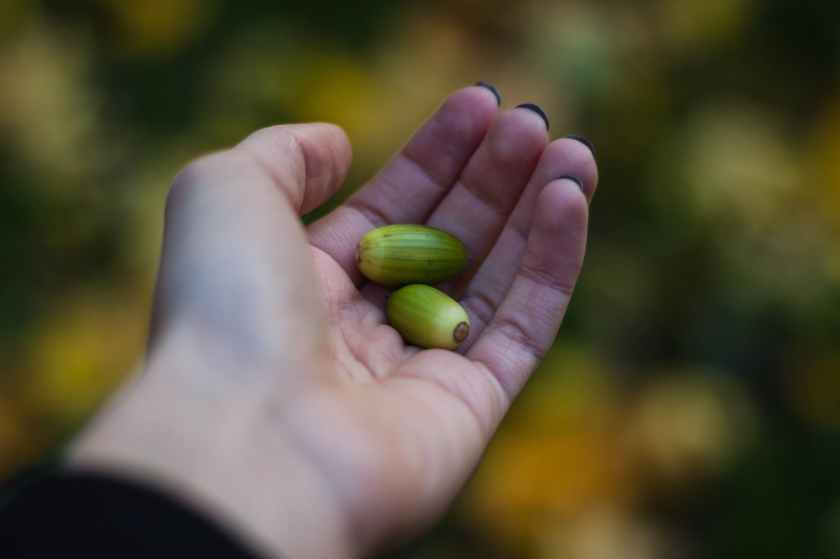 Dan found a seed and planted it in his family garden.

He wondered to himself, “What type of seed is it? An acorn or a pineapple or a …”

One day, he saw a tiny green point. Dan still watered the plant as he did every day.

Ten days later, it was one metre tall. Every day, it grew ten centimetres taller which was very quick for a plant.

He saw some apples on it the same day, so he thought it was an apple tree.

Thirty days later it was three metres tall! He said to himself, “This tree is growing quick.” Then he saw it was growing apples, mangoes and acorns which were all fresh.

Another month later it was five metres tall! And this time it was growing five different types of fruit. He thought, “I could pick some fruit and make a fruit salad.” When he picked the fruit in the same place, the fruit grew back!

When Dan had finished afternoon tea, he went to play fetch with his dog, Tom.

While Tom was coming back, he got out his note book and wrote:

Plan: I want to build a treehouse in my tree, enjoy the fruit in the tree, climb to the very top of the tree, have picnics under the tree and a swing.

Dan wanted a friend to play with, but most kids went to school.

Five days later, Dan started to build his new tree-house. When he was nailing his third piece of wood, he broke a branch off and it fell into Sam’s farm. (Sam was the neighbour.) He was resting out in his garden when he saw that some of his strawberry plants were crushed.

Then Sam told Dan, “I will tell your Mum and Dad to chop down that tree.” After Dan heard this, he was sad.

Sam had a little girl and her name was Sally. When Sam went to get the garden hose to water the farm, Sally came out. When Sally saw the treehouse that Dan was making, she wanted to be friends with Dan so that Dan would maybe let her go into the treehouse.

Sally went to Dan’s garden and then said, “Could you and me be friends?”

Dan answered, “Yes, we can be friends.”

Sally said, “Could I help you in building the treehouse?”

So Sally and Dan set to work. CRASH! BANG! CRASH! BANG! The sound of the nailing was so loud that Sam came out and shouted, “Stop that noise!”

Then he saw it was Dan and Sally that were making the noise. And he saw their happy faces. He thought, “I should not tell Dan’s parents to chop down that tree. Or else their happy faces will became sad faces and now Sally has got a friend and I don’t want Dan to be sad because he might not want to be Sally’s friend.”

In the end, Dan became Sally’s best friend. And together the parents and children happily built the treehouse and the swing.

Gabriel is a regular contributer to Alphabet Soup. You can read some of his earlier work here. If YOU would like to send us a story, drawing, poem, or book review, check out our submission guidelines. Happy writing!