Today we are very pleased to welcome Teena Raffa-Mulligan to Alphabet Soup. Teena’s publications for children include poems, short stories, picture books, chapter books and middle grade novels. She has also worked as a journalist and editor. Teena’s latest publication is a picture book called When the Moon is a Smile (illustrated by Amy Calautti). This is a gentle story about a small girl spending time with her dad, who no longer lives with them.

When was your first piece of writing published?
A long time ago! I was a member of an ABC radio club for kids called The Argonauts and I had a poem read during one of their sessions. That gave me the confidence to send it to the children’s page of the Sunday Times newspaper, where it was published. I’m not sure of the exact year, but I think it was maybe 1964. About 10 years later I had my first two children’s stories accepted and they appeared in Woman’s Day magazine.

You write poetry, picture books and novels – how do you know which format will be best when you have a story in your head?
Good question, Rebecca. Usually the story ‘tells’ me and I go along with that. However, sometimes I’ll write what I think is a picture book but then I can’t find a publisher. So I make a few changes and submit them as poems or short stories to magazines and anthologies – usually successfully. Interestingly, my children’s novel Mad Dad for Sale began as a picture book that I couldn’t sell. Catnapped and Getting Rid of Wrinkles also began as picture books. 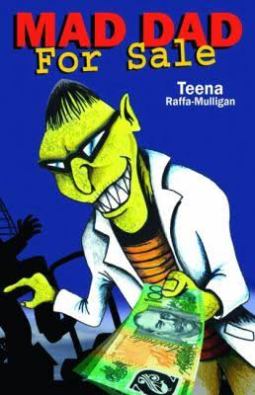 Your latest book – When the Moon is a Smile – is a picture book. How do you go about writing a picture book once you have the story idea?
I scribble random sentences and paragraphs from anywhere in the story on scrap paper as they pop into my mind. Then I get a clean sheet of paper and divide it roughly into page spreads so I can work out how the book might work. When I finally sit down at the computer, it’s a bit like doing a jigsaw puzzle. I put all the bits and pieces in the right order and play around with them until everything feels like it’s in the right place.

Do you have a tip for young writers wanting to write a picture book?
Writing stories is fun. You get to create characters, put them in weird and wonderful situations and then decide what happens next. Don’t worry about whether what you’re writing is an amazing story. Just play with the words. Let one follow another and see where they take you. It’s an adventure.

What’s next for you?
I’m working on a novel called Talibut Vish. It’s about a kid who hires a parent tamer because he’s had enough of trying to sort out his problem parents. At first Mike thinks he’s found the solution to his dilemma. But when Vish becomes less of a friend and more of a threat, Mike realises he has a bigger problem than misbehaving parents. It’s a fun story to write but because I don’t really know what’s going to happen from one chapter to the next, it’s taking me a long time to get to The End. I’m 14 chapters in but I still have no idea how Mike is going to escape from Mr Vish, find his runaway parents and reclaim control of his life.

This interview is copyright http://www.alphabetsoup.net.au May 2019

When the Moon is a Smile will be available from June 2019. Find out more about Teena Raffa-Mulligan and her books by visiting her website: www.teenaraffamulligan.com