Raewyn Caisley was born in New Zealand but has lived in Western Australia for more than half her life. She’s the author of many, many books. You’ve probably read some of her books from the Aussie Bites and Nibbles titles, or perhaps her picture books Hello From Nowhere and Something Wonderful. Raewyn has two new books out in 2020 — Rocky and Louie (co-written with Phil Walleystack and illustrated by Dub Leffler), and Meet Eve in the Outback (illustrated by Karen Blair).

Today we’re chatting to Raewyn about Meet Eve in the Outback, part of  the new Aussie Kids junior fiction series. 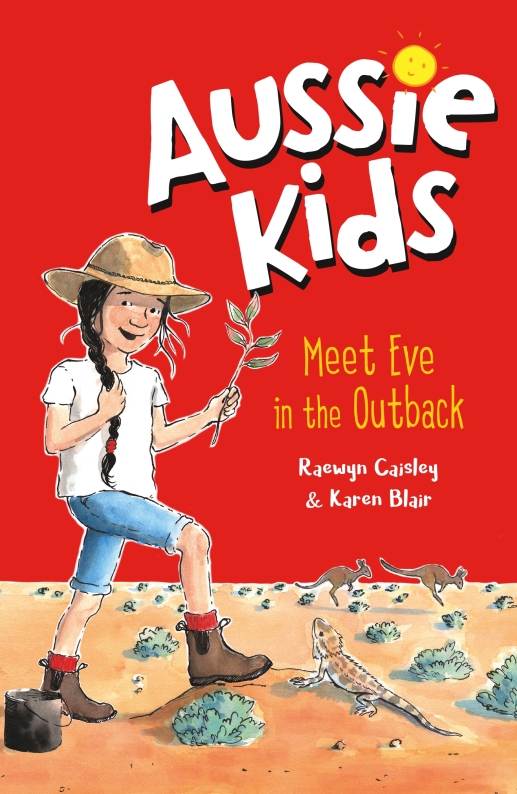 Hi! I’m Eve.
I live at a roadhouse in the Nullarbor. We don’t get many visitors. But today my cousin Will is coming. We’ll have so much fun!

Eve is a character readers might remember from the picture book Hello from Nowhere. What was different writing about her for a junior fiction book?
Her personality had to change a tiny bit. Younger Eve wouldn’t have worried about Will not seeing the magic. She just assumed Nan would, (and of course she did), but older Eve knows a little bit more about the world. She knows Will has dolphins where he lives for example. Little Eve’s experience was only her own immediate surroundings.

Older Eve has had more experience of her own place too. She’s helped Doug with the chores on the sheep station and she is friends with Wally now. She knows about the space station and about telegraphs. It was important to include details bigger kids would be interested in.

Oh, and another thing! With junior fiction the words have to carry more of the story because there aren’t illustrations on every page but that meant I could really have fun describing all those new places, thoughts and people.

Were you in contact with the illustrator (Karen Blair) while you were writing Meet Eve in the Outback?
I wasn’t in contact with Karen while I was writing it and if she’d said ‘no’ or been too busy I would have been up the creek without a paddle. But I knew she’d love Wally …

Meet Eve in the Outback is part of a junior fiction series. Were you asked to write a particular story in the series, or did you come up with your own story ideas?
My publisher and I came up with the idea for the whole series together. I sent them this story. The original title was ‘Next to Nowhere’. They responded with, ‘What if we do a whole series of these set in all the different states and territories of Australia?’

It was a little bit of a bummer because I had five ideas for five books set out in the Nullarbor and starring Eve and Will, but being part of the Aussie Kids series has turned out really well. It’s the right series for the right time. When kids can’t get out and see Australia for themselves at least they can read about how other Aussie kids live and see our beautiful country on the pages of a book.

Do you have a tip for young writers about creating story characters?
My tip for creating characters is, decide what they’d have for breakfast! Would they cook? Would they grab a bowl of cereal? Would they spill the milk? Would there be any milk?! Would they gulp it down or would they set the table? Is there any cutlery? Has anyone done the washing up? Would they eat alone or with someone else? What time of day would they have it?

Once you know what your character would have for breakfast you probably know them well enough to start writing a story about them.

Meet Eve in the Outback is out now! Available from book stores and libraries.

Visit Raewyn Caisley’s website for more about her and her books.

Read an earlier blogpost about the settings in Raewyn’s books.