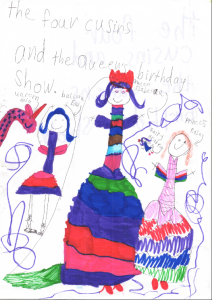 THE FOUR COUSINS AND THE QUEEN’S BIRTHDAY SHOW

Once upon a time there lived a happy group of cousins. There was Princess Rosa, Fairy Arabella, Ballerina Ella and Unicorn Mia, but the most beautiful of all was Queen Isabella. The group was very excited because the Queen’s birthday was coming up!

On the night of the show as they were getting dressed a fire alarm sounded. Everyone rushed out of the room. Rosa was worried, how would they do a show on a fiery theatre?

‘How about we cancel the show?’ suggested Ella.
‘No way!’ shouted Rosa.
‘Maybe I should cast a spell to melt the fire?’ suggested Arabella.

When she had finished she stood up to take a look.

‘I think it’s a bit soggy,’ said Rosa. ‘Maybe we should do our show on a different theatre?’

Once they got to the new theatre it looked strange. ‘Let’s get changed here,’ said Ella.

Suddenly Rosa remembered, ‘we forgot to clear the old theatre!’ she screamed. They ran back to the old theatre and they saw some people trying to dance on it. Rosa saw that they were falling over and tripping over.

‘What will we do?’ asked Arabella. ‘How about my dancing in the air spell? It’s a spell you cast on people when they are dancing on wet soggy floors.’
‘But your magic only lasts until two o’clock.’
‘How about we mix up the shows,’ said Rosa.
‘No way!’ said Ella and Arabella. ‘That would be worse.’ Then all of a sudden it became an argument.

In the end they decided to take turns of dancing. On the night of the show it was marvellous. The theatre had dried and they could have the show again! The queen loved it. At the the end of the show they all curtsied and bowed and then they went home to have their dinner and sleep.

This is Isabella’s first story published with Alphabet Soup. If YOU would like to send us a story, drawing, poem, or book review, check out our submission guidelines. Happy writing!