A copy of this book was sent to us from the publisher. 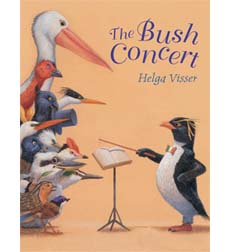 There’s a terrible drought in the bush and the birds decide to put on a concert to cheer themselves up.

It hadn’t rained for a very long time.
Food and water were hard to find.
Everyone was feeling low.
What could they do? Where could they go?

The birds get dressed up and put on a show. There’s music, singing and dancing, clowning, acrobatics and a lot more. And the concert ends with the perfect finale …

You’ve probably read a few stories about the bush that feature Australian animals. In this rhyming picture book, the story is about Australian birds. The detailed and colourful illustrations are in ink and pastels and show a wide variety of birds—pelicans, penguins, an emu, galahs and many many more. At the end of the book there is an illustrated glossary of the birds in the book. All 171 of them! Test your knowledge of Australian birds—how many can you name?

One thought on “Book review: The Bush Concert”