This book was selected for review from the editor’s own collection. 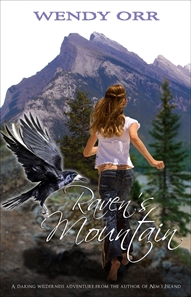 Raven isn’t thrilled about moving—and leaving her friends behind. When her step-dad decides to take Raven and her sister Lily mountain climbing they aren’t thrilled about that, either. But when Raven gets to the top first, she is ecstatic and does a

and that’s when the rock tilts and everything goes wrong.

Raven has to find her way back down the mountain on her own to find help for Lily and Scott before it’s too late. She’ll have to summon up enough strength and courage to keep going. And going.

While Raven is trying to make her way down the mountin, she has a lot of time to think—she worries about Scott and Lily, she thinks about the friends back in Cottonwood Bluffs, her mum, the bear family they saw on the way up the mountain (and the advice Scott gave her about bears), and her dad who left the family when Raven was very young. It’s a physically and emotionally demanding journey for Raven but she is determine to save her sister and step-dad.

I didn’t want to put this book down. It’s highly recommended if you love adventure and stories of bravery … and possibly if you love being outdoors and mountain climbing—though hopefully you’ll never find yourself in Raven’s situation!