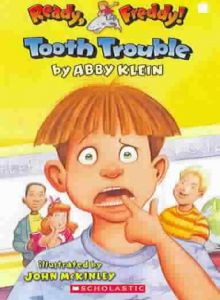 When I first got this book I was thinking it is a bit long, however—I took the book. I also got another book in case it was too hard. However, it wasn’t hard. It only took 3 nights to finish.

Freddy is the only one in his class who hasn’t lost a tooth yet. So he has a problem. He wants to write his name on the big tooth poster at school. It isn’t an ordinary tooth, it is a big poster tooth. Every time you lose a tooth, you write your name on the poster with a special pen with a tooth on the end. The next day Freddy gets into a fight with Ben. Freddy wanted Ben to hit his mouth so that his tooth falls out. Freddy gets a fist to his stomach instead.

Should I tell you the ending? No—what about you find out by reading the book.

* Yidarra Catholic Primary School is a member of our Undercover Readers Club. The book reviewed here was Lachlan’s own copy.