Tania McCartney is the author of fiction and nonfiction picture books. Now she is launching the first book she has written and illustrated. Today one of our regular book reviewers — Matilda, aged 10 — asks Tania some questions about her new book Australia, illustrated.

Matilda: Why did you think of illustrating this book yourself when your other books are illustrated by other people?

Tania: Just like you, I’m sure, I absolutely loved to draw when I was a kid. Writing and drawing was my thing. I did it right through school and into high school but then something terrible happened. I became an adult.

Well, actually — it’s not terrible to become an adult! But what IS terrible is that so many adults stop doing the things they love, and instead do the things they ‘should’. So I lost my ability to draw, and I really, honestly believed I could no longer do it.

I began writing children’s books around 10 years ago (around when you were born! spooky!), and I had a secret dream to illustrate my own books. I never, ever thought that would happen because I still believed I could no longer draw.

Then, in 2014, I started the 52-Week Illustration Challenge [a group of illustrators where the members each create their own illustration in response to a weekly prompt] and over two years I learned that I could still draw! I couldn’t believe it! At first, my drawings were pretty horrid, but over that time, they quickly improved — and that goes to show that practice does make ‘better’!

I was stunned and delighted when my publisher said they’d be happy for me to illustrate my new book idea — Australia Illustrated. I was also a bit scared. Could I do it??? Well, I did. And I still have to pinch myself!

Here is a picture of my first drawing for the 52-Week Illustration Challenge, and then after that you’ll see a page from Australia Illustrated. Do you think I’ve improved?

Matilda: How did you have the idea for a book like this about Australia?

Tania: There are so many books about Australia, but I wanted to do something really different. I don’t know of any other book like this one.

For a start, it’s a whopping 96 pages! (Picture books are generally 24 to 32 pages.) And it’s also unusual in that it’s mostly pictures, with only a handful of words.

It also covers parts of Australia that are really well known (like our animals and icons like the Sydney Opera House) but it covers things people don’t know much about, too — like quokka selfies or Tasmanian chocolate factories.

The other thing I’ve done with Australia Illustrated is that I’ve included lots and lots and lots of kids of all different cultures and races. I think it’s important to celebrate the multicultural country we live in!

Matilda: How many of the places in your book have you also been to?

Tania: What a great question. I’m going to look through the book and tell you exactly!

Okay, I’m back. So, out of all the places I cover in the book (towns, sites, states) I’ve been to around 70 out of around 100. This doesn’t include the maps I’ve done for each state which have hundreds of place names — though I have been to a lot of those places, too. I like to travel!

My big dream is to go to Uluru. I used to be a flight attendant and I used to fly over it all the time! If they’d given me a parachute, I could have jumped out and gone to see it! I’m hoping next year I can go.

Matilda: What was different about illustrating your own book instead of having someone else illustrate it?

Tania: Oh, it was SO different. It was the first time I’d ever illustrated an actual book so I wasn’t really sure how to do things. In fact, I did the cover first … and books are hardly ever done that way! But it worked out really well for me.

It was fantastic being able to have control over how the book looked visually. And it was also fantastic to get to draw whatever I wanted — it was such a creative process and I loved it so much. I could mix things up and change things and dream up kooky things. It was just SO much fun.

When you have an illustrator doing pictures for you, it’s a whole different experience because the illustrator reads your words and has their own thoughts about how the pictures should look. When my illustrators send me their pictures, it’s like Christmas! Opening the email to get a wonderful surprise — a beautiful picture. It’s really exciting — and you can never guess what they might have created.

You may have heard of that saying ‘two heads are better than one’ and when I work with an illustrator, I find they bring so many great ideas and thoughts to the text. They might read my words and see things completely differently from me — and they could add some wonderful things to the story with their illustrations … extra things that I may not have thought of.

I love both ways — illustrating my own books and having illustrators create the pictures, too. They are totally different but both are a lot of fun.

Oh, and also — when you illustrate your own book, it’s twice the work!

Matilda: Are you planning to illustrate more books?

Tania: I am. I’ve already started on three illustrated books and each one of them is going to be digitally illustrated. In December, I’m starting work on a big book for the National Library of Australia. I’m doing the illustrating but someone else is compiling the book — someone quite famous! I can’t say more yet but I’m really excited about that one.

I also have some ideas for more picture books I want to illustrate but I want to try a different style — perhaps just watercolour. And a few people have asked me to illustrate their books, too. I might be doing one for a friend, not sure yet — we’ll see! The thing about publishing is that we so often say ‘we’ll see!’

Thanks for the wonderful questions, Matilda. I just loved them. 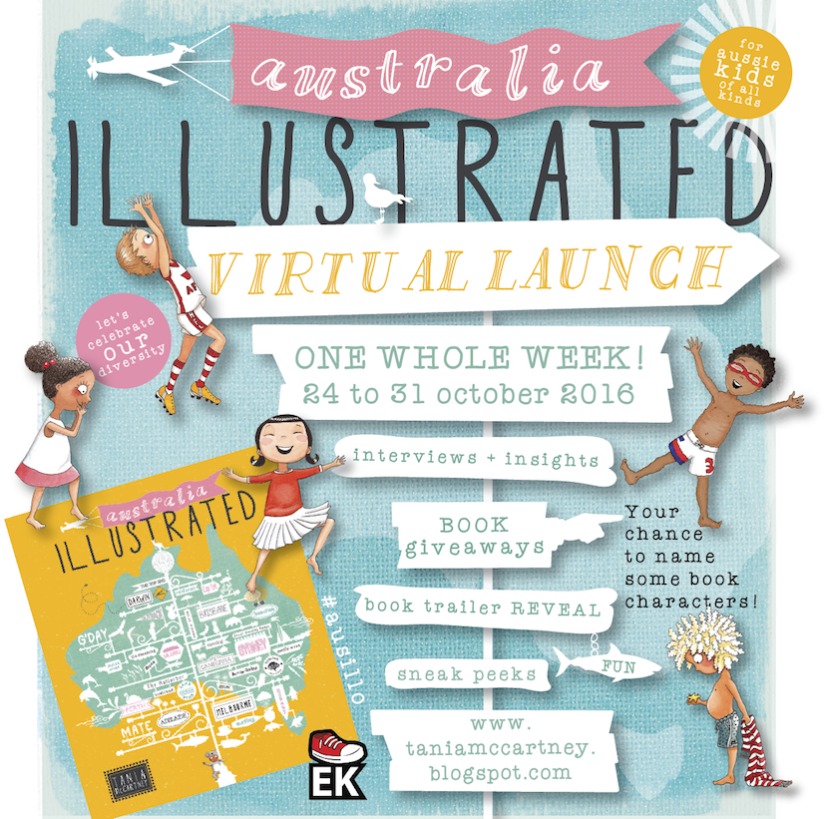 Visit Tania McCartney’s website www.taniamccartney.com for more information about her books and to join in the celebrations for the launch of Australia Illustrated.

1 thought on “Tania McCartney on creating a picture book”