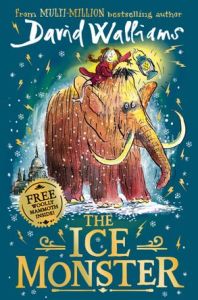 Kala reviewed her own copy of this book. This review was longlisted in Alphabet Soup’s 2020 Young Book Reviewers’ Competition.

I first read The Ice Monster last year at school as our class novel, and it was so amazing that I wanted to read it again! I got the book for my birthday and I ended up reading it again a few weeks later.

The story starts with Elsie, who is an orphan. She escapes her orphanage called “Wormly Hall”. She goes to the Natural History Museum and finds a woolly mammoth.  Elsie brings it back to life and goes on a brave adventure to return the mammoth to the Arctic.

There are many characters but the main characters are Dotty, Woolly, Elsie and the evil professor.

Elsie is an orphan who lives on the streets for a while. Woolly is a woolly mammoth and Elsie’s friend. Everyone says that Woolly is an Ice Monster but Elsie thinks differently. Dotty is dotty by name and nature. She is a cleaning lady in the Natural History Museum. The professor is an evil person who tries to steel the mammoth.

The story is set in three places: London, the North Pole and the High Seas. The year is 1899.

This is a book full of adventure and humour. I would definitely recommend this book.

These are some of the funniest quotes from the book:

“You can’t name a mammoth Woolly, that’s like naming a dog Doggie.”

My favourite part is when Elsie brings Woolly back to life by shooting a lightning bolt in Woolly’s chest to restart her heart.

I like the illustrations but I think Toni Ross should add some colour to them.

I would give this book four and a half stars out of five.

During May and June Alphabet Soup will be posting all the book reviews by those longlisted in our 2020 Book Reviewers’ Competition.