JOLIE’S ADVENTURE: A TRIP INSIDE A BOOK
by Amanda, 7, New York City, USA 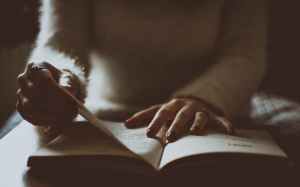 One summer day Jolie was stuck in her bedroom looking for something to do. Jolie, an 8 year-old girl, loved her bedroom because it was her comfort zone and a space for her imagination to grow. Sitting on her canopy bed she picked up a book named ​Especial Characters ​sitting on her nightstand.​ ​Jolie, a very fast reader, loved to read drama filled stories and E​special Characters​ fit the category.

As Jolie began to read the words from the pages started to leave the book and spin around in large, round circles. Suddenly, a character appeared in real life. In that moment Jolie said to herself – what just happened​!

Jolie gasped in surprise. “Hi!” said, Lina. Lina was the character that Jolie just read about in the book. As the book described her, Lina was tall with long dark brown hair, and wore braces only on the top of her teeth. She was dressed in a blue jumper with small, green leaves covering the front of it.

Jolie was so startled she couldn’t even speak. Jolie fainted because she couldn’t believe this was happening. Jolie got up as fast as a tiger chasing prey. When she woke up she saw Lina looking over her. Lina was as tall as Jolie – the height of a 8-year-old girl!

“Why are you here? Who are you?” asked Jolie.

“I am here because I need you to help me find a golden glove and my name is Lina. Most people like to call me Lin,” Lina shared with Jolie.

“So, you’re telling me you want me to help you find a golden glove?” Jolie said confused.

“Wait! Where are we going? My babysitter will be worried if she does not find me sitting in my room!” Jolie says nervously.

“ Just hold my hand!” Lina commands. Jolie holds her hand tightly and starts to spin around like the wind in the hurricane. All of a sudden, they are in the book ​Especial Characters​​! Jolie is feeling anxious. She is panicking because this reminds her of The Magic Treehouse book series … and she never imagined being Jane!

What Jolie doesn’t know is that Lina wants to find the golden glove because it will keep all of the characters inside the book. This needs to happen because in the past few months other children have been throwing the books away once they see the words spinning off of the pages. Once this happens the story changes and the characters disappear forever!

Holding hands, Jolie and Lina jumped into the book and landed in C​hapter 4:​ Jane and the Treasure Map! ​Jolie hoped this was going to be another fun excursion like her journey to Mathematics Land. They found themselves in California standing in front of a townhouse. Lina knew inside this townhouse there was a treasure map. ​Knock! Knock!​ Lina knocked on the door. A girl with long golden hair opened the door. It was Jane!

“We need to talk,” Lina said in a serious voice. “Okay,” Jane said.

Jolie was wondering how Lina knew Jane. Lina and Jane knew each other because they are both characters in the same story. Lina quickly told Jane what was happening to the characters when a reader opened the book. Lina desperately asked Jane if she could look for the treasure map in her house. Jane let her in and as Jolie waited outside she thought to herself – where could the treasure map be?

Eventually, Lina found the treasure map under the bookshelf and it showed that the golden glove was at​ The Harlem BookStore, w​hich is in C​hapter 5: TheBookstore​.Now Lina and Jolie hold hands and spin around and around again to their new destination .

Suddenly, they are at T​heHarlem BookStore​ and find the golden glove between two books.

“Now that we have the golden glove what do we do?” questioned Jolie.

Lina replied, “You have to take it back with you and restart the book.”

“Restart the book?” Jolie was confused.

“Jolie, there is a key hole at the top of ​Especial Characters​ for the key that is inside this glove!” Lina explained as she took out the key. Lina took Jolie’s hand and they twirled around and around until they got to Jolie’s bedroom.

“Put the key in the book and close your eyes,” Lina said in a sad voice. As Jolie inserted the key Lina disappeared back into the book. In the next minute Jolie’s babysitter came to her bedroom and said, “Are you okay … you seem so quiet?” Jolie nodded her head and smiled. She thought to herself what will be my next adventure?

This is Amanda’s first story for Alphabet Soup. To send us YOUR book review, poem, story or artwork: check out our submission guidelines.

15 thoughts on “Young writers in action: Jolie’s Adventure … A trip inside a book”