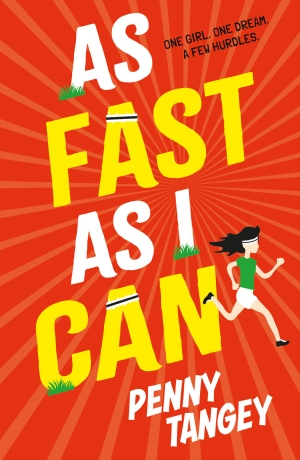 Anishka received a review copy of this book from the publisher.

Ten-year-old Vivian Hassler would like to pursue her dream of competing in the Olympics. She’s not exactly sure what she’d be good enough at to compete in, but Vivian is sure one day she could compete in the Olympics. Olivia, her best friend, supports this idea and would like to go to the Olympics herself one day too. Vivian thinks she is not even remotely good at anything (unlike Olivia) except long distance running. Vivian took part in races where she constantly won and conquered. Events take an unexpected turn – will Vivian have to give up her dream of going to the Olympics?

I think this book was targeted for readers that had interest levels in sport or just interest in stories where the main character faces difficult choices. Penny Tangey wrote As Fast As I Can and had written many other books which are all fiction and for young people. When she was in year 5, the 1992 Olympic games were held in Barcelona. Penny was inspired by the Olympics. She and her friends vowed they would become Olympic athletes. Penny wanted to write a story about girls playing competitive sport just like she did. And that was how the book As Fast As I Can was made.

I would rate this book 10 out of 10 because it is a truly magnificent book about resilience, persistence, determination and most importantly, acceptance.

Read an interview with the author of this book.

Anishka is a regular contributor to Alphabet Soup. You can read an earlier book review (The Friendly Games) here. If YOU would like to send us a story, drawing, poem, or book review, check out our submission guidelines.