Michelle Kadarusman writes novels for children and teenagers. Michelle grew up in Melbourne, Australia, and has also lived in Indonesia and in Canada. Her books have been translated into Spanish and Turkish. Today we’re chatting to Michelle about her own voices novel The Theory of Hummingbirds. Like Alba (the main character), Michelle was born with the condition talipes equinovarus (commonly known as club foot) and underwent operations when she was still young.

Alba has been best friends with Levi since forever. They’re both obsessed with hummingbirds and spend their lunchtimes hiding out in the school library. Alba normally doesn’t mind that Levi’s got a science theory on just about everything. But when he becomes convinced the school librarian has discovered a wormhole in her office, Alba thinks maybe he’s gone too far.

Then there’s Cleo. That’s what Alba calls her left foot, which was twisted in the wrong direction at birth and has been strapped in a brace for most of Alba’s life. With the final cast about to come off, Alba is set on running in her first cross-country race. But what if Levi doesn’t believe she can do it? 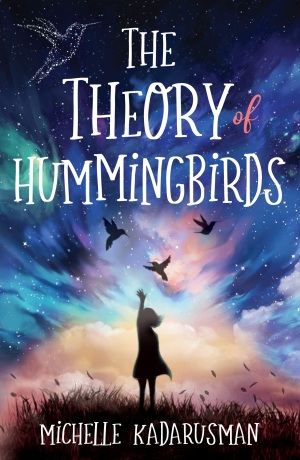 Did you already know a lot about hummingbirds before you wrote the book?
The first hummingbird I ever saw was at a friend’s lake house in Canada. I grew up in Australia where we don’t have hummingbirds, so when I saw my first hummingbird, I was very excited. They are so tiny and dart around like fairies. I was mesmerized and knew that I wanted to include them in a story. I read all about them for research before writing the book.

Alba and Levi are both committed and persistent in working towards their goals/theories. Were they inspired by anyone you know in real life?
Like most fictional characters, both Alba and Levi have traits of real people I know, but mostly they are from my imagination.

Can you tell us a little about your next writing project?
My current work-in-progress is a middle-grade novel set in my father’s homeland of Indonesia. It centres around a captive orangutan and two middle schoolers. One is a budding animal and environmental activist the other is the orangutan’s keeper. It will delve into palm oil deforestation, the black-market exotic pet trade, identity and belonging.

Do you have a writing tip for young writers?
I have three tips! The first is: read a lot. Read, read, read. Reading is what all writers do to learn and become inspired.

The second tip:  let yourself be bad at first. Don’t expect to be able to write like your favourite authors right away. It will take time to develop your craft. Keep working at it and let yourself make mistakes.

My third tip: listen to feedback from people you trust, the feedback will always help you become a better writer.

The Theory of Hummingbirds is out now, and available from bookshops, libraries, and the publisher!

Check out photos of hummingbirds on the National Geographic site.

Tell us what you think! (We love comments.) Cancel reply

This site uses Akismet to reduce spam. Learn how your comment data is processed.